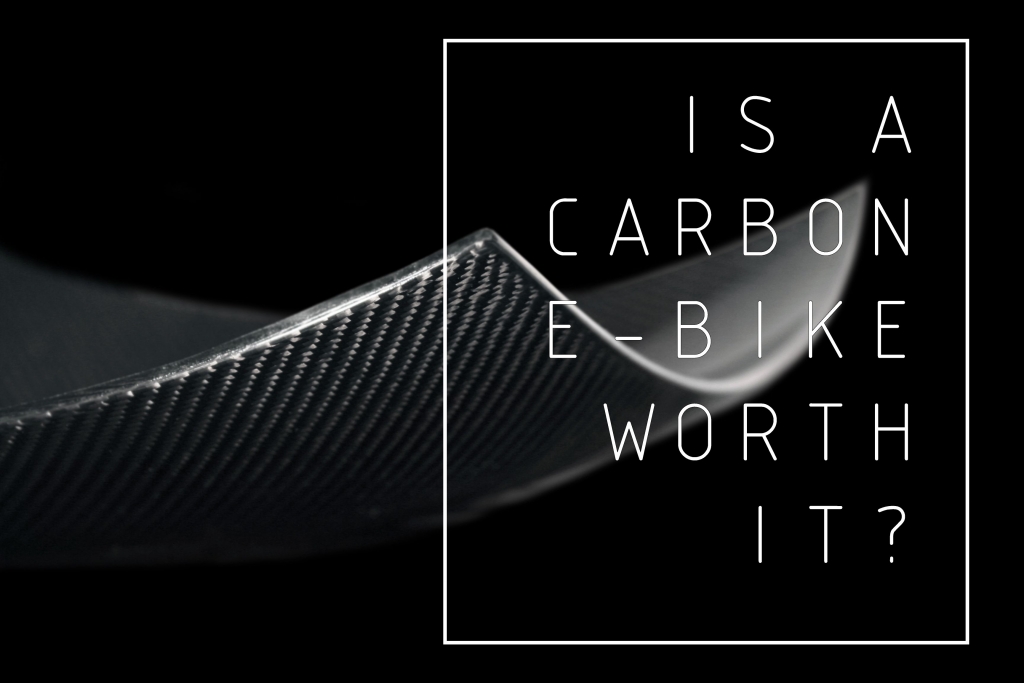 If this debate was six or seven years ago, carbon fibre would’ve swiftly ended the arguments with its superior characteristics. However over the years, with more knowledge of materials and mechanics of cycling, the debate between aluminium and carbon fibre is more complex than it once was. Throw in an electric motor and battery into the mix, and it complicates this debate even further!

Before we get into it, let’s break this argument down to five factors:

These factors will be explored with respect to carbon fibre and aluminium. This will provide all the facts with some science and engineering. I’ll then conclude with my opinion on carbon fibre eBikes with justifications based off the information gathered and my past experiences.

When purchasing a bike, regardless whether it’s a regular push bike, eBike, road bike or mountain bike, the most important factor is strength. Without strength, the bike will fail, and with failure comes tears running down your face because you can’t ride anymore!

Okay so strength! What is it? How is it measured? At the fundamental level, strength can be defined as the limit where a structure or material can no longer withstand the experienced forces. In engineering material terms, it’s the limit at which a material completely yields or fractures. Aluminium used in bicycles are generally variations of 6061, with the most common being 6061-T6. This material possesses a UTS (ultimate tensile strength) around 310 MPa (megapascals). Carbon fibre on the other hand has a typical UTS of 600+. These values slightly vary, especially with carbon fibre, as companies use different techniques and weaves which affect the material properties.

with strength, carbon fibre is a clear winner.

Weight is prioritized differently according to disciplines, for example cross country riders favour weight over cost. They’d fork out (pun not intended) a hundred dollars for a carbon bottle holder to shave 7 grams off their bike. Jokes aside, weight is a factor with bicycles that differs with disciplines, and is more important with eBikes in my opinion. Because let’s be frank here, no one wants to ride an eBike that feels like a tank.

With weight, a property used to compare the materials is specific strength. Similar to strength, specific strength considers the weight of the material as well. In layman’s terms, it’s the strength to weight ratio. Aluminium 6061-T6 has a specific strength of 115 kNm/kg (kilonewton-metre per kilogram). Carbon fibre obliterates this figure with a whopping 2,400 kNm/kg value. This clearly shows that carbon fibre has greater strength for the same weight as aluminium; or in other terms, requires less material to achieve the same strength.

you want lightWeight? carbon fibre is your guy

Cost is obviously a significant factor when purchasing a bike. It’s the reason why we aren’t all riding on titanium Lynskeys or the Haibike Xduro Nduro 9.0. I mean for some people, they have no worry for the damage a bike inflicts on their wallet. However for most of us, we are conscious of our purchases and would like to keep our kidneys.

Carbon fibre was once considered an exotic and high end material. Only the finest and wealthiest riders could afford it. However with the industry growing and technology progressing at an unprecedented rate, the cost gap between aluminium and carbon is closing. With that being said, aluminium is still cheaper than carbon fibre. I couldn’t find exact numbers, but just by taking a look at retail prices of bikes offered in both an aluminium and carbon version, it’s evident that carbon fibre is more expensive to purchase.

In terms of your wallet, aluminium is your best friend.

Durability is a strange factor, because although it’s very important, I feel like not many people consider it when purchasing a bike. It’s almost like global warming. It’s important, but no one really cares (unfortunately). I see a lot of riders switch bikes after every season, or upgrade to the latest and greatest. It seems like the manufacturers consider it more a factor than the actual riders.

Since carbon fibre has an extremely high UTS when compared to aluminium, it naturally possesses a higher fatigue strength. In other terms, it can withstand a greater number of cyclic loadings. Just have a look at the graph below where the stress that begins to damage carbon fibre occurs at 740 MPa/density. Aluminium (although it’s not 6061-T6 in this plot) begins at a point a lot lower at 300 MPa/density. With this being said, it is possible for both materials to have infinite life cycles. This would occur if the stresses experienced are below the threshold (700 for carbon and 110 for aluminium).

carbon wins durability because it can take greater stresses whilst lasting just as long.

Ride and feel is the final factor which can be affected by material choice. For the common rider, I don’t think many people would ever consider this. It’s only the enthusiasts or professionals who would pick up the minute details. I personally believe a portion of carbon owners only purchased carbon because it’s hyped, gives you bragging rights, and looks amazing. I mean, check out this Yeti…

In materials science, stiffness can be measured by Young’s modulus. It’s commonly expressed as Pascals, and carbon has an approximate value of 200 GPa (gigapascals) whereas 6061-T6 aluminium is 70 GPa. Since carbon fibre is stiffer, bikes feel more responsive and agile. Theoretically this should mean carbon is better; however feel of a bike is subjective that no one can really explain with numbers. What feels perfect to rider A might be unfavourable to rider B. It’s all subjective. What complicates this even more is the bike’s geometry and set-up as well.

Winner? Depends what you prefer.

With that all said, hopefully we’ve all got some sort of idea on what carbon fibre is, how it works, and the differences between it and aluminium. Let’s throw an eBike into the mix now!

From the little essay above, it’s clear that carbon fibre is typically chosen by riders due to its strength and its lightweight. The price you have to pay however, is significantly more (even though the cost of carbon frames have gone down over the years). Most high end aluminium bikes will retail around $4,000, whereas a carbon variant will be $6,000. Throw an electric motor and lithium ion batteries on that and it jumps up to $8,000 like this Haibike Xduro Full Seven.

$8,000… Let that sink in for a little. $8,000. That’s equivalent to a used car or a decent used motorbike. Let’s say you’re ambitious and you want to purchase it for $8,000. What are you getting? You’re getting a carbon eBike, which is still heavy!

But isn’t the point of a carbon frame is to reduce weight?

Yes, but due to the electric motor and battery (which is a good 5-10kg), the overall weight of the bike is significantly greater than the weight shaved by using carbon. It’s all about relatively. If you weigh 10kg, losing 1kg is 10% of your overall mass, but if you’re 100kg and you lose 1kg, that’s 1%! The change feels insignificant.

It has a carbon main body with alloy chainstays (common with carbon MTBs). It has a total weight of 13.11kg, whereas the Aluminium Remedy 9 has a weight of 14.15kg. That’s only a saving of 1kg. On average, electric mountain bikes are 20kg. Therefore 1kg is only a 5% weight reduction for 20kg bike. Not much. The same goes for the stiffness of the eBike. Since electric bikes are so heavy, carbon’s stiffer characteristics isn’t going to change the responsiveness of the bike to a significant level.

Yes, it’s extremely strong, and is the only benefit for a carbon eBike frame. With the added motor and battery, the stresses experienced by the bike frame increases. These stresses are resulted from the added weight, but also the added power from the motor. In this case, carbon’s superior strength is suitable for eBikes.

Like I said, no one cares about that. Right?

Wrapping this all up, you’ll find that the only advantage I find with carbon eBikes is strength. The usual advantages with carbon frames such as weight doesn’t have enough impact once you add an electric motor and batteries onto the frame. I’ve also ridden a carbon bike already and reviewed it, where I said the same thing.

Are the strength and stiffness benefits from a carbon eBike, worth the price hike?

No, I don’t think so. Even with its superior strength, durability and stiffness, in my personal opinion, carbon eBikes are not worth it. There are some special designs for cross country or portable commuters where carbon becomes more attractive, but the price jump is ridiculous. Once you add electrical components which are the heart and soul of the eBike, they become more important. Spend the extra money on quality electrical components. That’s money better spent. But hey, I can’t tell you guys what to do. After all, I do want that Mondraker E-Crusher!