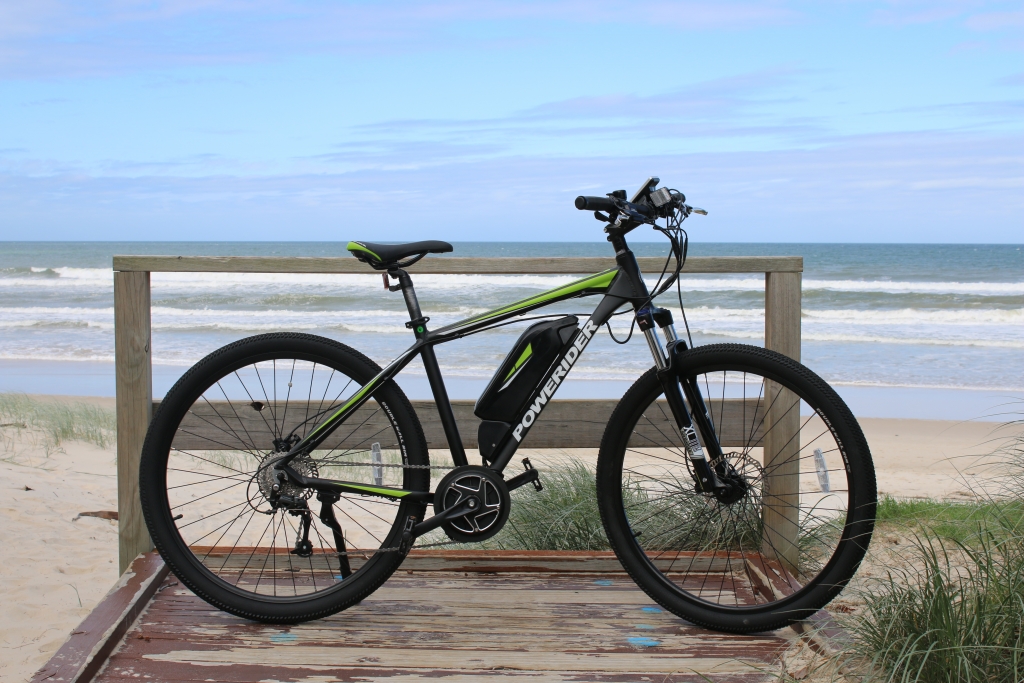 practical and versatile ,the whole package. mid drive, hydraulic brakes, 14ah samsung cell battery. what more could you ask for?

We can all agree that the price of living has gone up, so when adding something like an electric bike to our lives, we want the best value. This is where the Powerider Thunder comes in. Targeted towards consumers looking for form and function across the road and trails, Powerider aims to provide us with versatility. Whether you need an ebike for commuting to work or for some fun on the weekend, the thunder aims to do it all.

Released only in a black colour way, the thunder maintains a simple aesthetic with green ascents throughout the aluminium frame, and the logo slapped on both sides. The bike is styled like your typical mountain bike with cross country geometry where the small mid drive motor alongside the relatively stealthy battery blends the electrical components with the bike.

This all sits on the large 29” wheels that are wrapped with Kenda rubber. These are your standard Kenda cross country tyres for fast and smooth rolling. Powerider have stated they can upgrade your tyres to Schwable if you want with your purchase. Now if we look at the front wheel, we can find a 180mm disc brake to stop you. The rears are fitted with 160mm disc rotors but both sets are Tektro Auriga E-Comp brakes. These are electric bike friendly with brake cut off sensors to stop the motor when the brakes are engaged. They are also hydraulic that uses mineral oil, which will help with the braking power and responsiveness, and like usual I show how they perform at 3:58 in the video review.

Powerider look to please with this BEWO motor fitted at the cranks. Barely noticeable from a distance, the crank driven motor is capable of a nominal 350W and is powered by a 36V battery, which might I add is 14Ah. This capacity is becoming the standard over the earlier common 10Ah bikes. It’s capable of providing a range up to 80km which should be enough for your typical commute to work and back home, with some spare juice left for some fun. Powerider have quoted that the Thunder can also reach a top speed of 40km/h which can be limited to 25km/h through the C600E LCD meter. By holding down the set button, the settings can be accessed where you can set your speed limit. Additionally, the mode such as power, normal and eco can be selected through the operation panel. This feature will adjust controller’s output to favour performance or battery capacity, and obviously normal will be the balance of the two. This is fairly simple and easy to use, with Powerider providing a manual on how to use it with their bikes. Aside from these settings, the meter will display the usual information such as speed, battery level and odometer.

To soften up your rides, the Thunder is equipped with a Velo sport saddle and SR Suntour forks. I found this combination to be fairly comfortable for the rides I went on. The saddle was plush and the 100mm travel forks provided adequate damping. This is a meant to be a hybrid sport slash commuter bike, hence the set-up is entry level, but more than anything, it’s appropriate considering the purpose and price of the ebike. This goes for the drivetrain components as well, with the shifters, cassette and derailleur sourced from the Shimano Acera and Alivio group set.

I was lucky enough to test the Thunder for a while due to the bad weather and a cyclone. Unfortunately this meant it delayed my filming and the release of this video but I guess it gave me more time with the electric bike; which I’m honestly not complaining about because it was a pleasure to ride!

After a while I found myself riding the bike just for fun, instead of riding it to review. This just goes to show what a pleasure this bike is to use. The controls are simple and if you do want more advance settings, the manual details all the settings for the LCD panel. Now the unboxing and set up of the bike was your standard- so fairly straight forward, but I did have some delays (which is shown in the video review) The first being the lines of the front brakes. I thought they were twisted as they ran underneath the down tube instead of in front as the lever on the right. This saw me spend extra time on taking off the grips and brake lever to bring it around the front. It wasn’t until after I realized I could have just turned my forks around before putting the handle bars on. I did think of that during the unboxing, but I must have had a mental blank because I thought it wouldn’t work. Thought I’d share that with you guys so you don’t run into that issue with yours.

My second delay was from the battery being turned off. I tried turning the Thunder on after the battery was put in, but it didn’t power up. I knew most batteries had an on board switch, but this was so tiny I overlooked it and struggled for a good half an hour to get the bike going. But eventually found it. You can find where it is in the video review around the 6:40. If you’ve got the Thunder or going to get one, check this switch if your bike isn’t turning on.

What is really interesting and stands out with this Thunder is that the free wheel is integrated into the motor whereas other bikes I’ve tested have the free wheel in the hub like the common push bike. This was something new to me, but what I noticed while back pedalling is that it was extremely smooth! This translated into pedalling and riding the bike as well, the BEWO mid drive was charmingly smooth. Not only that, but it was quiet. Much like the Aklo A-kit I’ve reviewed before, the bike’s assistance starts off minimal and ramps up to provide a smooth linear feeling much like a torque based sensor ebikes although this uses a speed sensor. This could be a good thing, or a bad thing depending on your preference but for me and considering the purpose of this bike, I think it’s a good thing.

Now you may be wondering what the trigger type thing is under the control panel is, or you might have guessed it – a throttle! Well you’d be incorrect. Actually it technically is a throttle, but I would rather call it the boost trigger! Other electric bikes possess a throttle that works from standstill, however with the Thunder it works more as a boost where once you’re moving, the activation of the trigger will see you speed up to maximum pedal assistance. So I assume when you’re riding and there’s a hill, instead of turning up the PAS, you just push the trigger. Again, this could be a good or bad thing depending on your preference. I personally like to have a throttle that will work at standstill to help me in difficult situations, but I can see the boost having some fans.

There are some set-backs with this bike, and I’ll begin with the size. It’s unfortunately only one size, with a quoted size of 19”. This is generally considered a large and would most likely only fit the larger riders. I’m 6’4, thus I found this to be perfect for me. So to those smaller riders out there, you might have to pass up on this one but Powerider do offer other ebikes with smaller frame sizes.

Another issue that I encountered with the bike (more so the battery) is that you can’t charge it while the battery is on the bike. According to Powerider, there were changes in design that resulted in an assembly error that doesn’t allow the charger to charge the battery through the port found on the battery holder. Because of this, to charge your Thunder you need to remove the juice pack first. This is just a small problem and definitely not a deal breaker. Powerider have stated there may be fixes to this in the future.

Powerider has recently overhauled their design and management, and as a result produced this Thunder. Their aim was to target consumers that want the best of both worlds, by providing a versatile do it all bike and frankly I think they have achieved that. The bike retails at $2600 and features a mid-drive motor, 14Ah Samsung cell batteries and hydraulic brakes. This is the definition of value. The bike is comfortable, easy to use and comes with super smooth performance. With only a few set backs being the one size, and lack of battery charging whilst the battery is on the bike, I think Powerider have produced a well-rounded successful bike. You can find the full specifications below* and also the link to the Thunder from Powerider here.

*Specifications may differ from supplier